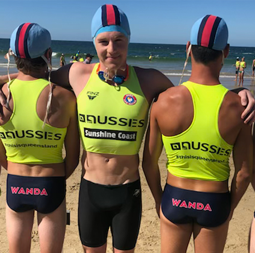 “It’s a superb result and an all round club effort,” said Nathan Spinner, Wanda SLSC President.

“We crowned 9 new Australian Champions, achieved many medalists and top 6 finishes against the very best of surf sports in Australia.

“Our results came from all sections, which is really pleasing and shows strength across all our sport programs. Importantly, it’s not just about those who win medals – we had a large team of athletes who came up here and gave it there all in every race and contest, which counts for everything.

“We showed fantastic team spirit for the 9 days – it takes a great group of athletes, coaches, officials, volunteers and supporters all working together to do well.

“Huge thanks to all our members who kept patrols going back at Wanda while so many of us were at Aussies,” said Mr Spinner.